Getting To Know: James Smith 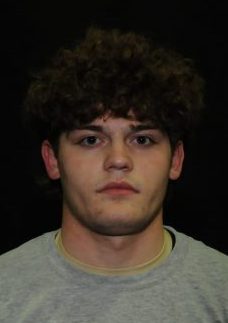 By DILLON O’DAY and KHALIL SMITH

James Smith is a wrestler in his senior year at Penn High School. He has committed to wrestle at Wisconsin-Eau Claire.

When did you start wrestling?: In the third grade.

What pre-match rituals do you have?: I listen to music and usually eat Jimmy John’s.

What has been your favorite wrestling moment so far?: Freshmen year, winning the dual meet on varsity against Carroll with a last-minute pin.

What advice would you give to other people trying to wrestle in their freshman year?: Do more than what the coaches tell you and work harder than everybody else.

How did you get into wrestling?: I got into wrestling because my friend in Rocket Football told me it was fun and I should try it, but I kind of thought it was WWE.

Why did you decide to continue to work so hard for the sport?: I decided to work hard for the sport because of how much my parents were invested in the opportunity to give me this. I realized that many people can not do this and they would kill for the chance to compete and have parents that support me as much as mine do.

Wrestling can be incredibly physically demanding, can you tell me a little about the work ethic required to succeed?: Wrestling is the hardest sport that a person can do. Some people take the easy way out and don’t put the extra work in and they don’t have a work ethic that will help them go where they want to go. To be a great wrestler you must have to be willing to have the work ethic that Olympians have. The mindset that someone is out training you are not a clique it’s the truth and you will learn that when you take some losses from Iowa and California kids.

Wrestling isn’t only difficult when you’re on the mat, you also have to watch your weight and sometimes cut a lot of it. How hard is it on your body having to lose weight so quickly?: I have always taken big weight cuts very well because I just say to myself it’s only one part of a bigger deal and I take it as one small step to a bigger goal. Once you can get past your mind telling you it’s too much your body can go through so much more than what the average person thinks because they are not as tough mentally. Cutting weight is just a test of how tough and truly strong mentally and physically you are. There are some effects on your body if you cut an excessive amount of weight like the UFC fighters do but, the Penn staff encourages us never to cut weight and truly wants us just to have fun and wrestle to the best of our ability because it’s more then a win or lose we are a family.

Does this have any significant effects on your mental health?: I don’t think that it has, I truly believe that the sport has mentally grown me into the best person that I would have ever been on and off the mat. The Penn wrestling motto “family” is also a big reason why I think this has not caused any mental health issues with me because we are all one big wrestling family no matter what school you wrestle for.

Has wrestling taught you any lessons that have helped you in other areas of your life?: Yes, Wrestling has taught me to best the best you have to beat the best. In other words later in life when I am trying to get the job that I want I cant think something will come I have to put the work in. I also have learned that there is always someone better no matter what you are doing and that has shown me that I want to be the better person in everything I do whether it be wrestling or NBA 2k21.

What have been some of the highlights of your wrestling career?: Some highlights have been placing at Frosh-Soph state, ISWA state, getting All-American, and traveling coast to coast with my Dad. I have been to 30 states just for wrestling and the experience of being able to do that with my dad I will be forever grateful for.

How difficult is it to be successful athletically as well as academically?: For me, it was not that big of a deal, because my parents taught me from a very young age that the grades come first and that’s what will get me into my dream, which is one day going to law school and becoming a lawyer. It was always a big deal for me to do the best that I could because I hate losing, even when it’s a math class Kahoot and I take second, I will beat that person in the next Kahoot.

What is one word to describe yourself as a wrestler?: Spadle.

What’s your favorite school to wrestle at (besides Penn)?: Warren Central High School.

What do you think it takes in order to succeed in wrestling?: Hard work and expecting a lot of disappointment.

What’s your favorite animal?: A flamingo.

If you can bring back one dead person, who would it be?: Juice WRLD.

What’s your favorite movie to watch?: The Afterparty.