Getting to Know: Bo Clark 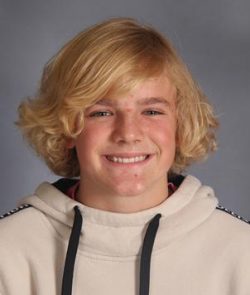 Bo Clark is a sophomore sensation on the Penn Hockey Team. He was an impact player as a freshman for the Kingsmen.

How long have you been playing hockey and what was the reason for starting?: I started playing hockey when I was four years old, and I really had no reason to start other than the fact that I wanted to try it out.

What was it like being the only freshman skater on Varsity last year?: Being a freshman on varsity was for sure a different experience at first. I was the only new guy coming in while everyone else knew each other. However as the season went on and I got to know everyone, we had a blast. Being on the ice with guys a couple years older was different for me as well. The first couple games were tough, however I was able to get back on my game and it was smooth sailing from there.

You had a big first year with the Varsity squad last year. What are you looking to improve on this year to compete at a higher level?: I’d certainly love to put up some more points this year. Also putting on weight, and getting stronger is a big focus for me. Consistency is also a big factor that I’d like to improve.

What do you feel your strengths and weaknesses are as a player?: I think I see the ice really well, and I can make the right play almost all of the time. I have a good shot, and put passes on the tape. A weakness for me would have to be consistency, I need to play every game 110%.

What are you looking forward to the most heading into your sophomore year?: I really look forward to getting back with the boys as well as skating again. I want to build on my season from last year, and have another good shot at a City, and state Championship.

What is your favorite part about playing for Penn High School?: Playing at Penn is a cool experience, we have a great group of guys and we all have the same goals that we work towards together. We support each other and work hard. Big games are lots of fun as well.

If you had to choose one person in the NHL you model your game after, who would it be and why?: I would say that I model my game similar to Sydney Crosby. I can make the right play, make good passes, put my teammates first, and I love to work hard. Sydney Crosby is a prime example of all these.

What are your plans after high school?: As of now, I don’t exactly know what I would like to do after high school. I certainly want to continue my hockey career however I am unsure of where that will be.

If you could have one meal for the rest of your life, what would it be and why?: It would have to be steak. Choosing sides to go with it would be tough, but I can never go wrong with a steak.