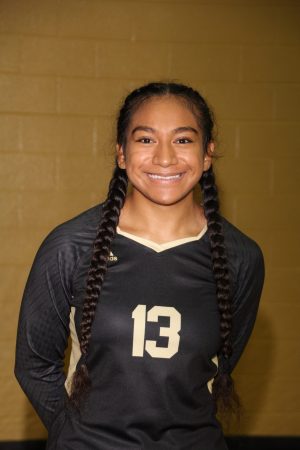 1. What’s it like being in a family of athletes?: It’s honestly really motivating. It makes me want to be as good as them. It’s challenging as well, since they always push me to do my best whether it be sports or school.

2. What are your pregame rituals?:  I don’t have a specific pregame ritual, but I like to be mentally prepared, so I quiet my body and mind to really be relaxed before a game. This helps me focus on what’s going on in the game and my mental toughness.

3. What’s the best moment you’ve ever had in volleyball and why?: This sounds weird, but I would say losing the Tom Heck tournament. I feel like in order for our team to get that boost it needed for the season, we needed a failure to learn from.

4. How would you describe the team spirit?: It’s amazing. Literally every game, the bench is going wild. It really adds to the team’s aura and is what Penn is all about.

5. If I asked a coach about you, how would they respond?: Depends on who you ask, but if it’s Coach Pawlik, she’d probably say I’m a hardworking player and coachable.

6. On a scale of 1-10 (10 being best) where would you put yourself based on your skills?: Eight, because there is always room for improvement. You may be the best player, but you could always be better.

7. Do you have a traditional celebration after a win?: We usually team it up after home games, but at away games and tournaments, we talk about the good that we saw during the game. We usually give out a warm fuzzy (puff balls used for arts and crafts) to the teammate you think deserves it and you say why.

8. Is it a challenge being on the road?: Definitely. There are bigger teams to play, but that’s always a chance to learn.

9. What’s your favorite college?: It’s between Indiana State and Notre Dame, just because my brothers play there. If you haven’t noticed, family plays a huge role in my life.

10. Do you have a role model?: I would definitely say my sister Lupe. She supports me and always knows how to help me break past my limits.