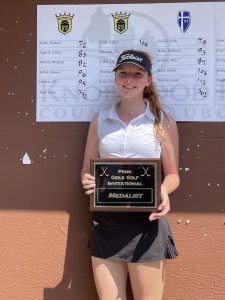 Delaney Wade earned Medalist honors at the Lady Kingsmen Invite with a score of 72 and led the Penn Kingsmen to the team title.

The Kingsmen placed three golfers in the Top 5.

Penn claimed the crown with a team score of 332. Marian placed second in the 10-team event with a score of 362, and Warsaw was third at 399.

Meghan Mounts of Penn was fourth overall with an 82.

Gillian Lippert placed fifth with a score of 83.

Jill Daniels posted a score of 95.

May Weston from Marian High School fired a hole-in-one on hole No. 2 on the Knollwood Course.