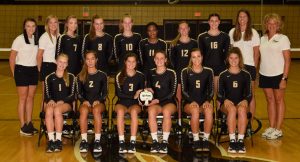 Penn’s Girls Soccer Team turned out in full force to cheer on the Penn Volleyball Team.

“It was so fun to be at home with our middle schools and girls soccer teams supporting us,” Penn Volleyball Head Coach Lisa Pawlik said. “It was a great team win and lots of smiles.”