Girls Soccer: No. 1 Kingsmen cruise past Wildcats in sectional opener 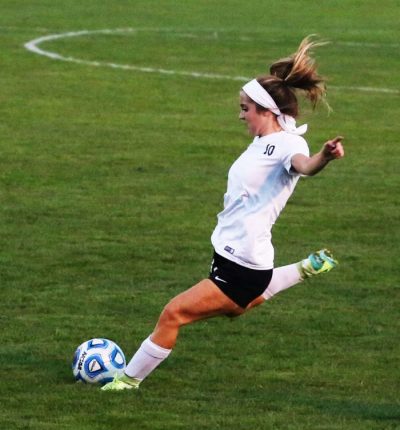 Penn (17-0-1) advances to the semifinal game against South Bend Adams on Thursday, Oct. 5.

Penn stung Riley with six goals in a seven-minute span in the first half.

Lauren Cernak scored a goal in the fifth minute to put the Kingsmen on the board.

Kristina Lynch followed that with a goal in the seventh minute to put Penn up 2-0.

Lynch scored her second goal in the ninth minute.

Lauren Hamilton followed that with a goal in the 11th minute to make a 4-0.

Brooke VanDyck also scored in the 11th minute to make it 5-0 Kingsmen.

Haylee Shahan scored in the 12th minute to make it 6-0 Kingsmen.

Molly McLaughlin added to the Kingsmen scoring total with a goal in the 19th minute.

Sydney Egendorfer scored in the 48th minute to make it 8-0 Penn.

Mallory Lehman closed out the scoring in the 54th minute to make it 9-0 Kingsmen.

The @IHSAA1 State Football Tournament kicks off in two days with the sectional games! Prepare like the players do. Prepare for the exhilaration. Prepare for the excitement. GET YOUR TICKET for a riveting Friday night! #ThisIsYourIHSAA faceofsportsmanship.…

Use the link for The Pennant Photo Gallery of the Boys/Girls XC Regional: pennant.phmschools.o… pic.twitter.com/Sfng…

HOCKEY: Penn 4, Adams 3. F/OT (Sat.) Phil Matous blasts in the winner 2:00 into overtime. Matt Laware pounded in the first goal for Penn. Bryce Crawford delivered a wrap-around goal for the second Penn goal. Matt Petrie smacked in a snipe goal to put the Kingsmen up 3-2. pic.twitter.com/Sm05…