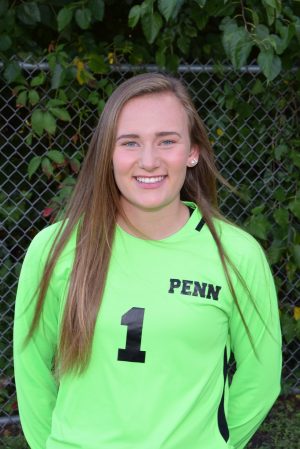 The Penn Girls Soccer goalie is a strong presence for her final season as a Kingsmen player. Abbie Clay has a rather strong bond with these girls and her coaches, and saying goodbye might be a little harder after all.

Clay will definitely miss her teammates the most as she closes out the final chapter in her Penn Girls Soccer career.

“One of the best parts of my day is getting to hang out with 60 other girls every day, getting to know them not only as soccer players, but as friends,” Clay said. “My teammates are such a blessing and the reason that PGS is such a fun, welcoming, and hilarious environment.

“It’s honestly super weird to think about not seeing them every day in the summer and fall next year — I will miss them all so much! They’re the reason I love PGS so much.”

All teams should create a personal bond as the season goes on, here’s a memorable moment showing how much love the PGS Team gave Clay in a time of need.

“My team has helped me with a lot of things over the years, but the one instance that sticks out is how they helped me after I got injured earlier this year,” Clay said. “I dislocated my shoulder early in the season, and was out for a few weeks.

“It was really disappointing, being my senior year, but (my teammates) were so supportive. Every day at practice, so many of my teammates would ask how I was feeling, how physical therapy was, and how much longer I would be out. It was really heartwarming.

“When I could eventually practice, but only with restrictions, they were cautious to keep me out of harm’s way,” Clay continued. “They were so encouraging until I was cleared to play, and I’m so grateful for their kind words and care.”

Clay’s favorite memory with her team would be the 2018 ‘riff-off’ versus opposing teams at the Zionsville Tournament.

“Each team sang random songs back-and-forth, trying to overpower and outperform one another. It was all in good fun, and was a blast! ” Clay said. “It was honestly hilarious how each team was so into it and really wanted to win, and I’ll never forget it!

“I loved how the teams were able to compete on the field and still have fun together off the field as well. It was a crazy day!”

As with all sports, coaches impact each and every player in one way or another. Clay shares a few personal words in how her coaches have not only shaped her as a soccer player, but as a person.

“I am really grateful for all the lessons the coaches share with us,” Clay said. “The one thing that has always stuck out to me from various talks and coaching moments is the idea of putting the team first. It’s truly great advice, and I believe that it is a concept that can be applied across the board, not just to soccer.”

Clay said that she appreciates the idea of putting the benefit of a larger purpose and the success of other people ahead of individual desires and plans.

“I definitely have my selfish moments, at soccer and otherwise, but this message of putting the success of the team first reminds me to think of how I can better serve my teammates, friends, coaches, teachers, classmates, etc. to set them up for success, instead of how I wish the situation was different in order to benefit myself.”

Clay says goodbye to PGS and high school, she is entering a new chapter in her life. Seeing from the help of her coaches and teammates, she is continuing her soccer career at Indiana Wesleyan University. And the lessons she learned in Penn Girls Soccer will serve her well at the collegiate level.