Penn’s Trinity Clinton named the top player in the NIC 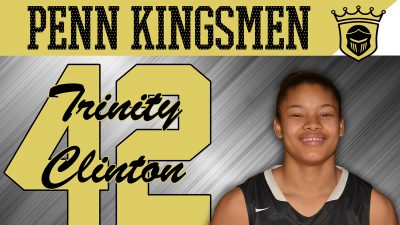 Trinity Clinton of unbeaten Penn High School’s Girls Basketball Team took home the prestigious award of the Northern Indiana Conference Player of the Year for the 2018-2019, the league announced on Wednesday, Feb. 6, 2019.

The MVP Award and All-Conference selections were made by the NIC coaches.

Coach Kristi Ulrich, who has led Penn to a 24-0 record overall and 12-0 NIC mark, was named the NIC Girls Basketball Coach of the Year. Penn won the NIC crown and the Sectional Championship. The Kingsmen play in the LaPorte Regional on Saturday, Feb. 9, 2019.

Reganne Pate of Penn, who leads the state with 95 three-pointers and a 53 percent shooting percentage from 3-point range, was named Second Team All-NIC. Pate is a 5-8 Junior.

Senior Kenzie Kilmer of Penn, a 5-9 guard, was named NIC Honorable Mention. Kilmer averages 8.4 points, 2.8 rebounds and 2 assists to go along with 2 steals. Kilmer is also committed to Taylor University to continue her career.