Hockey: Getting to know Jacob Renbarger 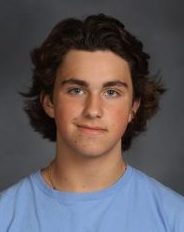 Who encouraged you to want to start playing hockey?: “My dad played hockey and played in men’s leagues and I always wanted to play from watching him.”

What accomplishments would you like to achieve in next season?: “I want to win state and city titles.”

Who is your favorite NHL player?:  “It would have to be Auston Matthews.”

What about Auston Matthews influences you?: “He’s fun to watch and I grew up watching him and hearing about him all the time when I was younger in Arizona.”

What are your future plans?: “My future plans with hockey are maybe playing juniors somewhere or playing college.

What is your favorite position?: “I’ve played every position in hockey but I would have to say forward is my favorite.”