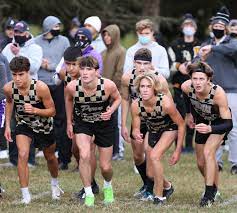 The Penn Boys Cross Country Team will compete in the Semi-State Competition. The team got second out of 10 teams at the Regional Championship.

Northridge defeated Penn for the Regional title, only beating the Kingsmen by 29 points.

Coming in second place for Penn, Sophomore Mathew Givens got 13th overall with a time of 16:35.

Coming in third for Penn was Junior Hudson Kaser. He got 14th overall with a time of 16:39.

Penn finished with five runners in the top 25.