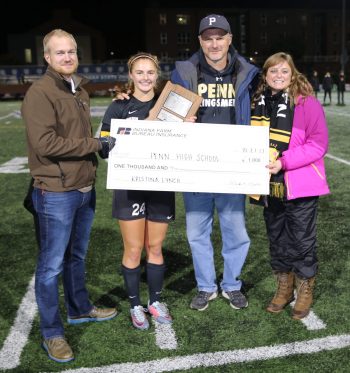 A midfielder, Lynch owns the Penn career record with 130 goals and has a record 68 career assists. She has 44 goals and 18 assists this season.

Named a First-Team All-American by USA Today, Lynch has been invited to play in the All-American Game in Orlando, Fla., on Dec. 2.

“Kristina is a remarkable student athlete who is genuinely dedicated to making her teammates better,” Penn High School Principal Sean Galiher said. “She always shows commitment to her team and treats others with respect and dignity. She is the model teammate who represents her family and school with pride.”

“Kristina Lynch is the epitome of Penn’s commitment to education-based athletics and our commitment to the concept of a student-athlete,” Penn Athletic Director Aaron Leniski said. “She pursues excellence in the classroom and on the soccer field. We are proud of the way she has represented Penn, and in the outstanding legacy that she has carved out. She is an outstanding role model for our younger players.”