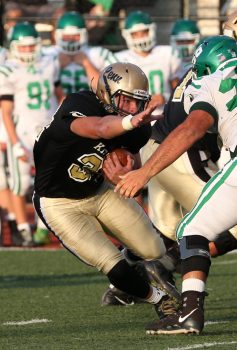 Penn High School unleashed a big plays in the second half to pull away from Valparaiso for a 21-3 high school football victory in the season opener on Friday, Aug. 17, 2018.

Ryan Whiteman put the Kingsmen on the scoreboard when he broke loose for a 40-yard TD with 3:47 left in the third quarter.

Wild Bunch hit man Caden Paquette then stung the Vikings with a Pick-6, returning an interception eight yards with 2:42 left in the fourth quarter to put the Kingsmen ahead 14-3.

Lightning struck again as Whiteman broke loose to sprint 29 yards with 2:10 left in the fourth quarter and the Kingsmen pulled ahead 21-3.