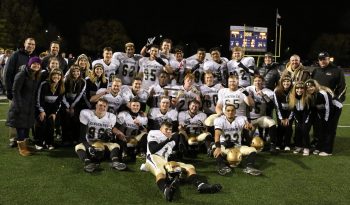 Jackson Weston picked off a pass with :34 left in the second quarter, and the Kingsmen struck for a 14-0 lead. Ryan Lynch connected with senior Zach Usenick for 14 yards for a Kingsmen TD.

Lynch blasted through the Carmel defense for a 23-yard TD run midway through the third quarter as the Kingsmen surged to a 21-0 lead.

Caden Paquette then stunned the Greyhounds when he intercepted a pass and zoomed 94 yards for a Pick-6, giving Penn a 27-0 lead.