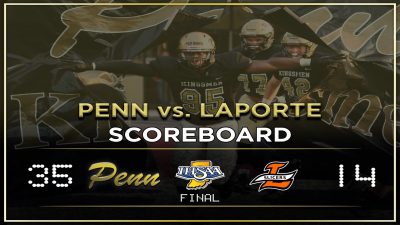 Penn used big plays on offense and defense to roll past LaPorte 35-14, in high school football action on Friday, Aug. 28, 2020.

Tye Zahner’s 35-yard interception return gave the Kingsmen their first touchdown with 5:05 left in the quarter.

Later in the quarter, Alec Hardrict had a 7-yard run to help the Kinsgmen to extend their lead 14-0.

Penn stung LaPorte in the second quarter when quarterback Ryne Buckley took the snap and pitched the ball to wide receiver Nick Favilla. Favilla, who switched to quarterback last season when starter Ron Powlus was injured, threw a pass to Carson Mumaw for a 17-yard TD play.

In the third quarter, Favilla made an exceptional 60-yard touchdown pass from Ron Powlus to get the Kingsmen a 35-0 lead.