Penn has 4 teams in semistate action, and tennis finalists 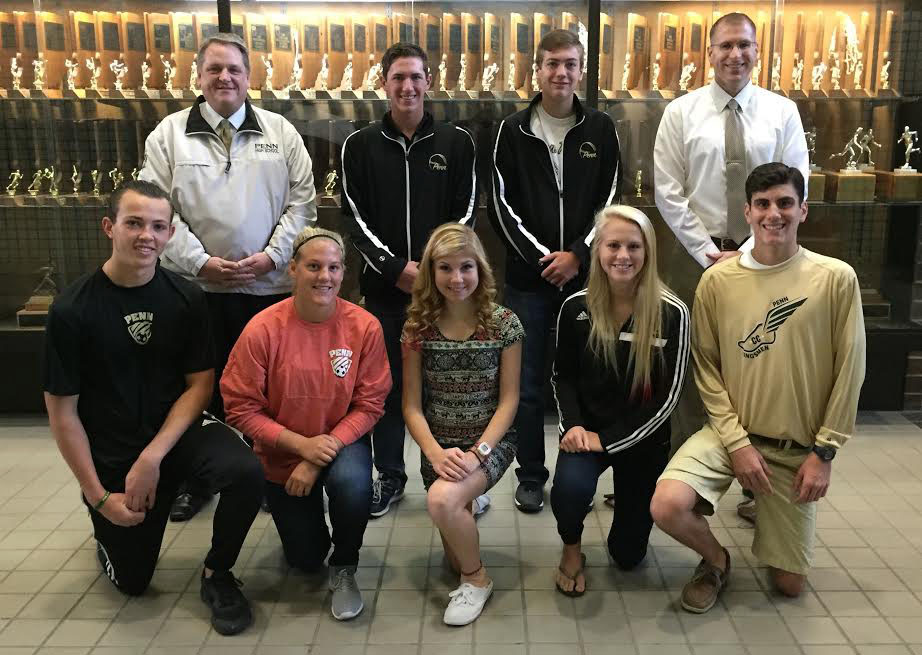 Penn High School is one of two schools in the state of Indiana with four teams competing in Indiana High School Athletic Association semistate events this weekend, as well as being represented in the IHSAA tennis individual state finals.

Center Grove also has four teams in semistate action this weekend, and has a tennis state finalist.

“The Penn community is proud to be represented by dedicated student-athletes who have our athletic teams competing at the highest levels in the state,” Penn High School Principal Steve Hope said. “The outstanding work of the coaches, and the tremendous support of the parents, families and fans of Penn’s student-athletes is greatly appreciated.

“I am very proud and excited for these teams,” Leniski said. “This is a major accomplishment for each of these programs and a reflection of the hard work, dedication, and commitment put in by these student-athletes and our coaching staff since the completion of the 2014 season.

“Penn High School is dedicated to striving for excellence in everything that we do, and our athletic programs seek to represent the P-H-M community to the highest degree,” Leniski continued. “I look forward to a great weekend witnessing outstanding teamwork and dynamic sportsmanship while facing fierce competition.  Go Kingsmen!”

BOYS TENNIS:  Thomas Gifford and Tim Porsche (17-3) play against Goshen’s Luke Rush and Logan Troyer (19-1) in the first round of the state finals on Friday at 2 p.m. on the Park Tudor courts in Indianapolis.

A ticket for the tennis state finals is $5 per person.

GIRLS SOCCER:  Penn plays Leo in the South Bend St. Joseph Semistate at noon on Saturday. If the Kingsmen win, they play the Fishers-Munster winner at 7 p.m. Saturday night for a berth to the state championship game at 3:30 p.m. on Saturday, Oct. 31, at Carroll Stadium in Indianapolis.

Penn defeated arch-rival St. Joe, 1-0, last Saturday to win the Goshen Regional. It was the eighth regional championship in program history, and first since 2013.

Coach Jeff Hart’s Kingsmen are 19-0-2 and have racked up 17 shutouts. Penn has outscored its competition 21-0 in state-tournament play.

Interesting notes for the Kingsmen include:

Tickets for the semistate are $7 for one session, or $10 for both sessions

BOYS SOCCER: Penn takes on Fort Wayne Canterbury at 10 a.m. on Saturday in the Warsaw Semistate. If the Kingsmen win, they play the winner of the Lake Central-Harrison match at 7 p.m. on Saturday. At stake is a berth to the Class 2-A state championship game at 6 p.m. on Saturday, Oct. 31, at Carroll Stadium in Indianapolis.

Coach Josh Nakayama’s Kingsmen are on a 12-game winning streak. Penn suffered losses in its first three games of the season, and has roared back from the 0-3 start to take a 15-4 record into the semistate.

Mac Smith leads the Kingsmen with 9 goals and eight assists.

Cost for a ticket to the semistate is $7 for one session, and $10 for two sessions.

GIRLS CROSS COUNTRY: Penn’s Lauren Frank won the individual regional championship, and the Kingsmen qualified as a team for the semistate with a second-place finish in the Elkhart Regional.

Coach Michael Clements’ Penn girls cross country team competes in the semistate at the Plexx athletic complex in Fort Wayne on Saturday. The semistate race is slated to start at 1:45 p.m.

Penn is seeking its first championships in girls cross country at the semistate and state levels.

Admission to the semistate is free.

Each of Penn’s seven runners earned all-NIC honors this season:

BOYS CROSS COUNTRY: Penn stunned Northridge by one point to win the Elkhart Regional championship and qualify for the semistate. Penn finished with 61 points, and Northridge came in second with 62 points.

It was the 15th regional championship in program history, and Penn’s second boys cross country regional title in a row.

Admission to the semistate is free.