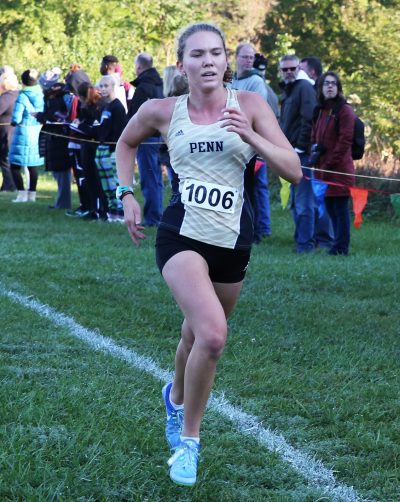 Marshall has been able to excel despite dealing with a painful medical condition.

“Near the end of my freshman Cross Country season, I noticed some tightness and tenderness behind my left knee.” said Marshall, who is now a Junior.

Originally, it was thought that Marshall had hamstring tendinosis, but the pain persisted.

Eventually, Marshall was diagnosed with a benign tumor on the nerve tissue in her knee, a condition known as neurofibroma.

Marshall has experienced struggles and difficulties with the condition, but she takes these things in stride and keeps her head held high while still helping Penn teams reach State.

“Nicole adds so much to our team,” Kingsmen Senior runner Cassidy Cripe said. “She’s supportive and encouraging to fellow teammates. Although she faces struggles with her condition, Nicole never fails to put forth 100 percent effort. She’s extremely determined and diligent, and you will never hear her complain about a workout. She never uses her struggles as an excuse but instead, it’s her motivation to keep pushing through.”

As a Freshman, Marshall ran about five miles a day. Now she is limited to three miles a day, but she makes her workouts more intense in order to make up for running a shorter distance, and pain is an occasional companion.

“Of course it’s been difficult having a limitation that is beyond my control.” Marshall said. “However, I believe that God doesn’t waste anything, and I have learned to appreciate the ability to run and to trust that He is in control of every aspect of who I am. Day-to-day, my leg does not generally hurt. If I run too many miles over the course of a week, the nerve will start to act up because of increased pressure from hamstring inflammation. I have learned a great deal about how my neurofibroma responds to various types of exercise.”

Some people might quit cross country if they encountered a health problem that caused pain and would limit them from running.

“I decided to continue running because of the family-like community of girls and exceptional coaches.” Marshall said. “Cross Country girls are some of the sweetest, most genuine people. As runners, we experience our best days and our worst days with each other.

“Running demands vulnerability, and when we are vulnerable, relationships can grow deeper and stronger,” Marshall said. “I have found that one of my main purposes in life is to encourage others to be the best version of themselves, so my running is not just about me. Running will make you the fittest physically and the strongest mentally. It teaches you to strive on in the midst of trial and have a mindset of success that does not dwindle; these are life lessons that will carry me into my adult life.

Penn Girls Cross Country head coach Michael Clements and his staff have Marshall and her limitations. They have found various cross-training methods and adapted her workouts so she can compete without irritating her leg.

“Penn is fortunate to have such a knowledgeable and flexible coaching staff,” Marshall said.

Marshall is driven by her situation to excel.

“Every race I compete in, every workout I complete, and every day I go without pain, I acknowledge as a blessing.” Marshall said. ” I do not find any of my success as self-earned, but rather a gift that I need to steward well.

“Just this past Saturday, I ran at Ox Bow’s County Clash. Last year at this time, I was not able to run due to pain from my neurofibroma. This improvement was a product of my coach’s cross-training techniques, and the understanding I acquired in talking with doctors in South Bend and Chicago.”

Marshall doesn’t see her neurofibroma as something that can stop her. Rather, she sees it as something as a part of her now. She’s even considering running at the collegiate level.

“When I first received the news of my neurofibroma, I definitely had moments where I wanted to give up.” Marshall said. “I felt as if a part of me, a side of me that I had known all these years, came crashing down in a matter of moments. But I soon realized that God had known about my neurofibroma for the extent of my life. My neurofibroma is not a pity injury, nor is it something to boast about. Instead, it is an opportunity, maybe even a gift that God has entrusted me with to use as a ray of light to the world. ”