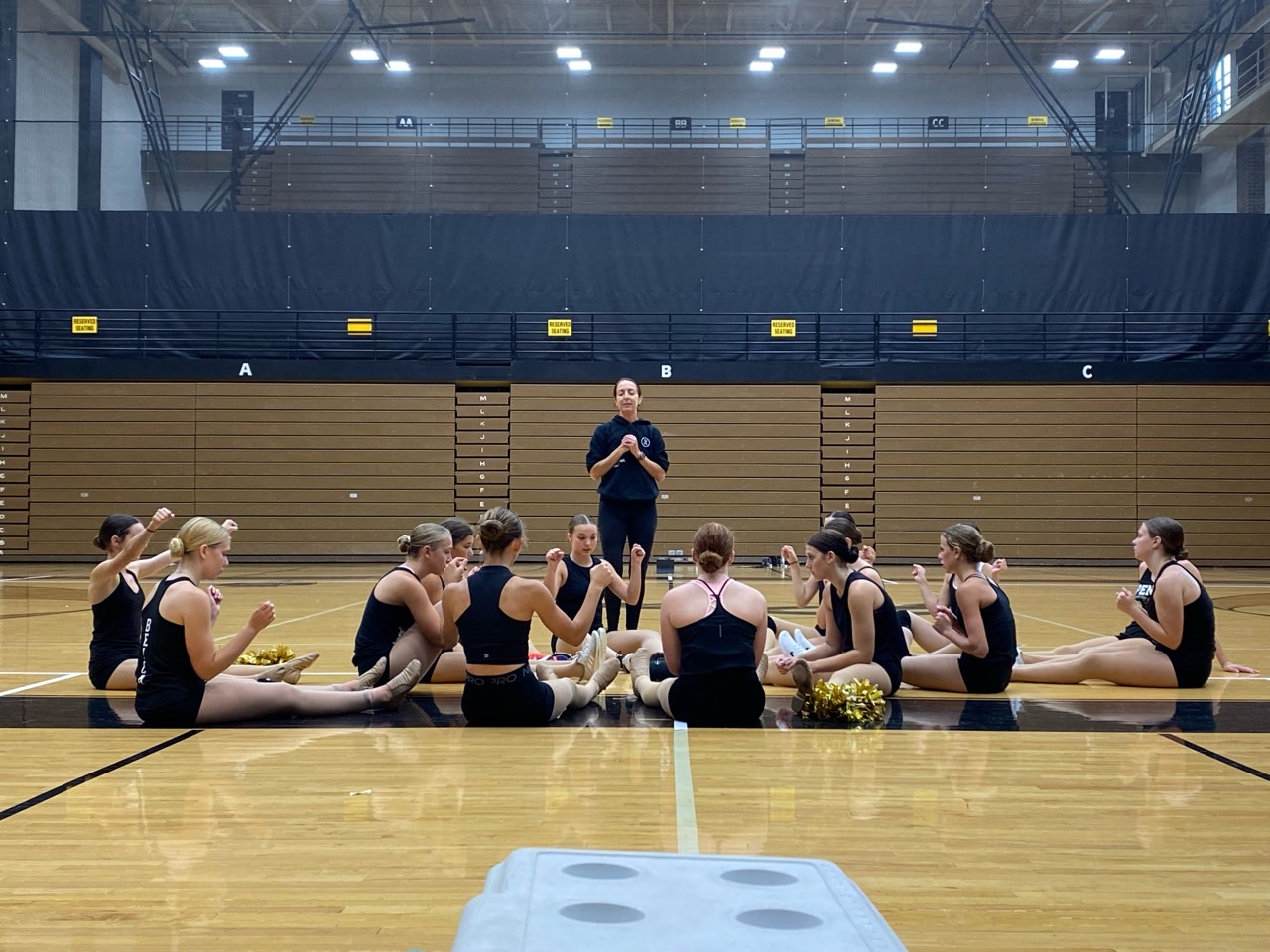 Lynelle Vandenbos mentoring the team while listening to the music

This season of the Penn High School Competition Poms team is one of the most talented groups to ever represent Penn High School. The first competition is at Clark Middle School in St. John, Ind., on Saturday, Dec. 18, 2021, and is going to be an indicator of how the rest of the season will go and how the team will end up at state. Every year the team has competed, they have made the Top 5 at state and plan on a Top 5 again for this season. However, they’re always looking for beating out the top three teams; Munster High School, Crown Point High School, and Lake Central High School. These teams are unmatched and the competition level is next to professional. This season’s Penn team is hoping to get scored higher against them and to have the confidence on the floor to show they’re also on that level.

The Penn team has been preparing and learning routines since late July. They are a very dedicated and talented group of girls. The team has two group routines for the 2021-2022 season: AAA Pom, and AAA Hip-Hop. Poms Head Coach Cindi Minegar also hand-selected a duet pair and four soloists. The duet is going to be performed by Bella Bauer and Lilly Wiess and solos are going to be performed by Bella Bauer, Gretchen Moore, Charlotte Jones, and Lilly Weiss.

“I’m very excited about this team for our competition season,” Minegar said. “This is one of the most talented teams I’ve had, and I’m looking forward to seeing what they will do this season. I feel like we are more prepared going into competition season which. 2021. All team members seem to be very excited for the season, especially because we are adding hip-hop to our repertoire for routines competed. The students also have opportunities to compete in ensembles and solos. We have a lot of talent and I am expecting them to do quite well this year. I am looking forward to this season hoping for another state qualification for the State finals that will be held in March of 2022.”

Soloists are starting to feel the nerves early on as they prepare for the competition. Lilly Weiss explains how she feels going into the first invitational.

“I am excited about this year’s competitions, and although there will be some tough competition, I am hoping to do well,” Weiss said. “For preparations, I have been doing solo and duet practices weekly and making sure I have time to work on it myself throughout the week.”

“I am very excited for the season this year and I am working hard to go out and do well,” Bauer said. “I hope to go out and put my best out on the floor for both my solo and my duet with Lilly. There will be some tough competition but through hard work and constant practice, I hope to do really well. My coaches have helped prepare me for this season to go out there and be the best I can possibly be. We practice both routines weekly and also practice technique and other dances outside of my solo and duet. I hope to do well this season and no matter what, I know that I worked as hard as I could and put my best out on the floor.”

Penn’s duet pair is eager for the season to start to see the progression over the season with scoring and choreography.

Preparing for the season has been a long and tough experience. From July 23 to 27, the team had 11-hour practices to learn choreography from “Tribe 99” choreographer, Lynelle Vandenbos. She has become an important team mentor for the girls and she has come to Penn the past two years from Washington to teach the team choreography. The team continued to work hard after the one week of mentally and physically draining practices. They have weekend practices to re-block routines and clean up details in the routines that could make or break scores and placement against other teams. They also have practices on Mondays and Wednesdays to perfect and review routines.

“So far the season is off to a good start,” Senior Captain Kennedy Chester said. “We have worked really hard and made a lot of progress with our routines and skills and I’m excited to continue into our competition season.”

The Penn Competition Poms team has been working hard the past five months not only as a team but as solos and duets as well and cannot wait to show it off on the floor this weekend at the first invitational, Kahler Middle School.