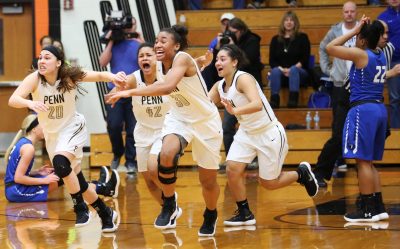 Sara Doi hit a driving lay-up in traffic with 4.5 seconds left, and the Penn High School Girls Basketball Team held on for a stunning 43-41 victory against Lake Central to capture the Class 4-A Regional Championship at LaPorte on Saturday, Feb. 10.

Penn trailed by as many as 11 points.

Lake Central led 41-39 when Tia Chambers hit a lay-up with 1:43 left. Chambers scored all six of her points in the final quarter.