Getting to Know: Tommy Limberopoulos 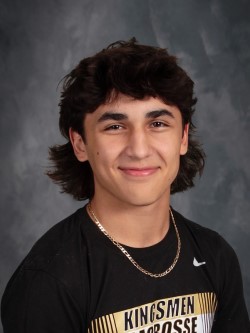 What position do you play? I play defense.

What’s the most important lesson you’ve learned through the game of hockey?: The biggest thing I have learned is to do your job. If everyone just does their job and performs well then the team will be successful.

How did you get into the game of hockey?: My dad played for Penn and he introduced me to the game.

Do you have any pre-game rituals?: I usually just tape my stick then also pray before I go out on the ice.

What advice would you give to a freshman about Penn athletics?: Don’t be nervous and have confidence. Even if you’re not the best, play as hard as you can every chance you get because coaches are always looking for kids who work the hardest.

What is your favorite thing about high school hockey?: I love how competitive the game is, and playing the big games such as Penn vs St. Joe.

What’s your favorite sports movie?: I would have to say “Miracle”.

Who is a player or coach that you see as a role model?: The team is full of a bunch of great leaders, but I would have to say that Avery Rivard is a person that I look up to. I’ve learned a lot from just playing with him for a couple of months now. He’s a great teammate on and off the ice and just a fun person to be around.

What is one goal you have for this season?: To help the team in any way possible.