Moala to Play in Polynesian Bowl 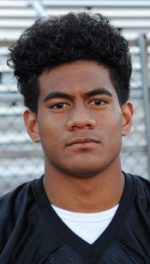 Paul Moala has been impressing fans on the football field for four years. This 6-foot-1, 200-pound defensive back made big plays for the Penn Kingsmen all season.

Moala was a force to be reckoned with on the Wild Bunch this season, leading the team with 79 tackles, recovering two fumbles, and intercepting a pass. Opposing teams feared him, coming off a great 2016 season where he picked off seven passes — four of which he returned for touchdowns.

All of these incredible feats earned him the title of Indiana High School Defensive Player of the Year, and a scholarship from the University of Notre Dame to play for the Fighting Irish.

Added to this list of honors is his invitation to play in the Polynesian Bowl.

The Polynesian Bowl will be played at Aloha Stadium in Honolulu, Hawaii on Saturday, Jan. 20. Dick Vermeil, who led the St. Louis Rams to a Super Bowl title and Terry Donahue, who coached at UCLA will serve as the head coaches. NFL players Danny Shelton and DeForest Bucknerwell will serve as honorary team captains. The game ambassadors include the Pittsburgh Steelers’ JuJu Smith-Schuster, the Baltimore Ravens’ Ronnie Stanley, the Tennessee Titans’ Marcus Mariota, and the Seattle Seahawks’ Michael Bennett.

You can see Penn’s Paul Moala playing for Team Mauka. He will wear No. 20 in a green jersey. Catch the game at 11 p.m. ET on Saturday, streaming live on ESPN3.