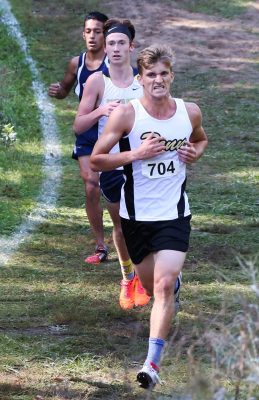 This past weekend both the boys and girls cross country teams ran their way to Northern Indiana Conference titles.  Their victories are huge accomplishments and both teams raced very well, with many runners achieving personal best times.

Despite the fact that all of the Kingsmen’s top scoring runners last year were seniors who led the team to multiple dominant Conference Championships during their tenure with the team, this year’s young squad got the job done.

The Kingsmen won by 13 points (51-64), edging out New Prairie and Riley who placed 2nd and 3rd place respectively.

While the varsity race was close for the boys, the Kingsmen’s outstanding team depth was on full display in the JV race.

The Kingsmen had all of the top 7 finishers in the race, and they got a perfect score of 15.

The Girls won the team title in dominant fashion, as was expected, being the favorites to win the conference all year.

The elite performance of Penn Cross Country was showcased in the Girls JV race as well.

Penn dominated this race, with 13 Kingsmen runners finishing before any runner from any other school.

Overall, it was a great performance for both Kingsmen teams.

Up next, the varsity teams will move on to their tournament season, starting with their Sectional Championships this Saturday at Erskine Golf Course.

The boys will be favorites against a field of six teams but they will have their hands full against Riley who will be running on their home course.

The Girls team are the heavy favorites to win their sectional, however, nothing is ever guaranteed.