Getting to know: Jake Lee 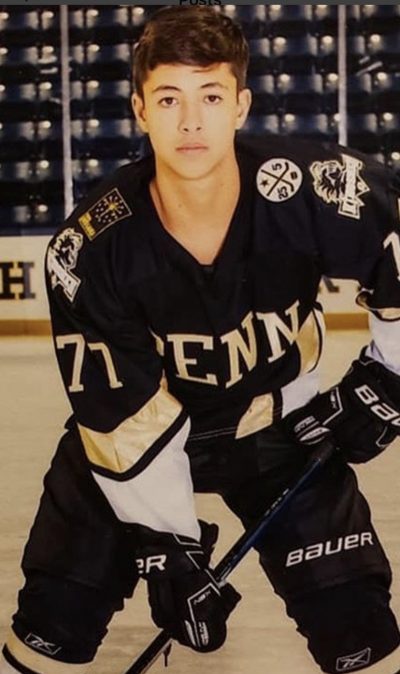 How long have you played hockey for?

Jake has played hockey almost his entire life. ¨I have played hockey for 13 years¨ he said. He has played for the Irish Rovers and Penn High School. And does not plan on stopping there. He will play for Penn two more years then find what and where he will do after high school.

What is your favorite thing about hockey?

There is a lot that comes with playing hockey for Jake, including, ¨the family factor with teammates.¨ For Jake this is where his season starts with his family. If you don´t play for something, what is there to play for then? He does his best and leaves his impression on everyone who was with him for the game and outside the game.

What is your favorite position to play?

With 13 years under your belt you probably have a liking and dislike for everything. Jake said, ¨my favorite thing about hockey is being a center.¨ After playing a year on Penn JV Hockey, he seems to have found his place as a forward in the footing of the defensive zone and the offensive zone. He appreciates the line and team watching him with every movement when taking a face-off and knowing it’s up to him to begin the offensive rush to score.

Do you see yourself playing hockey after high school?

After two more years of hockey at Penn, Jake will have the chance to decide what he does. His response to that was ¨yes,¨ and with the skill he brings to the team and his unique speed, there is no saying on how far he can go with some motivation to play. He isn´t quite sure on where he will play, but still plans on playing after high school.

Do you have any pre game rituals?

Some players will juggle pucks and some people will listen to music, but for Jake it is nothing. ¨I don´t have any pre-game rituals¨ He is one of the old-fashioned players. If you come to play you have the energy. He sure can prove every game that a pre-game ritual is not needed for winning a game.

What do you think it takes to win?

¨I think it is a mix of a good team bond and good skill level to mesh.¨ A team is nothing if the team isn’t a group of friends to Jake. But to win everyone needs to be on the same page. A team is as strong as its weakest link. Without a link, though the team won’t be strong and won’t be a team. Broken and disbanded is just what Jake hates to see and be on a team with.

What is your favorite type of stick?

Jake’s simple but straight-forward answer was ¨a Nexus ADV¨ a type of stick. With the future technology put into this stick and in the hands of a skilled player is what Jake needs to be even better. This stick helps with shot accuracy and strength of a shot. With a normal stick, Jake does not feel it is enough, but this one tool is a game-changer.

If you could no longer play hockey, would you play any other sport?

¨Maybe lacrosse, because it´s like hockey.¨ Jake’s love for hockey runs deep inside him. And without hockey, it would be like a part of him was ripped out of him like a stuffed bear without any stuffing. But the closest thing to hockey is lacrosse, a sport similar to hockey but also has its own twist on it.

Advise you would give someone who plays hockey?

Jake feels ¨If you are not having fun then what is the point?¨ To be mad at something your entire life is no way of making yourself a better player. Hockey is not for everyone and it would not be for Jake if he didn´t have family members who played before him. So for him to be happy while playing will bring out the best in him while mixing that with his competitive side of him