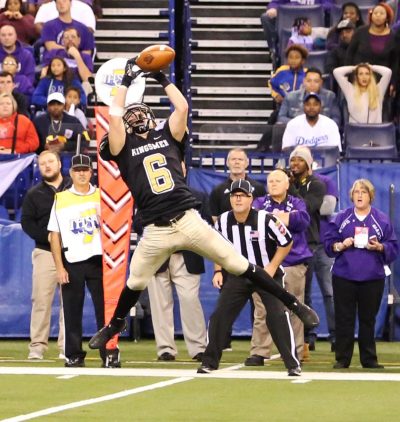 It wasn’t the way the Penn High School Football Team wanted the season to end, a 63-14 loss to Indianapolis Ben Davis in the Class 6-A State Championship Game on Saturday, Nov. 25.

But the 2017 Penn Football Team carved out a lasting legacy, and embarked on a remarkable journey that will own a proud place in the Kingsmen Athletics pantheon.

A Photo Gallery of the State Championship Game is posted here.

Penn’s Football Team suffered a season opening 12-7 loss at Valparaiso, and then struggled in the second game of the season, a 7-0 victory against Merrillville.

Then, inspired by exceptional Senior Leadership and guided by the Kingsmen Coaching Staff under the direction of Head Coach Cory Yeoman, the Gold and Black turned their season around.

Penn rolled through its next six regular-season contests, wrapping up the Northern Indiana Conference Championship with a 48-7 victory against arch-rival Mishawaka.

In the Sectional opener, the Kingsmen traveled to Valparaiso, turning the tables on the Vikings for a 13-0 victory.

Penn wrapped up the Sectional Crown with a 40-0 victory against Warsaw, and then won the Regional Championship with a 33-3 victory at Crown Point.

On Sunday, the community honored the Penn Football Team for overcoming adversity to make 2017 a Championship season with Northern Indiana Conference, Sectional, Regional and Semi-state trophies.

At the Community Celebration, Penn-Harris-Madison Supt. Dr. Jerry Thacker praised the Penn football team for its commitment to excellence and for embodying the Triangle of Success that has P-H-M ranked as the Gold Standard in Indiana.  Dr. Thacker also thanked the parents, staff and students for their involvement in the commitment to excellence.

Penn Principal Sean Galiher congratulated Penn Football, the parents, students and all who made a tremendous team effort that saw the Kingsmen reach the State Championship game.

Penn Athletic Director Aaron Leniski lauded Penn football for an outstanding cumulative GPA of 3.27, and for being outstanding role models for the youth of P-H-M.