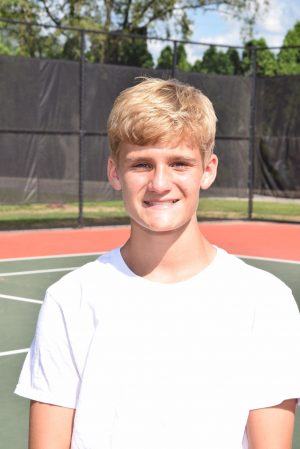 Peter Tiebout is a Junior on the Penn Boys Tennis Team, which won a 2019 Sectional Championship. The Pennant’s Ben Feltzer has a Q&A with Tiebout.

What is your pregame ritual?: Before each match, Coach Bowers gives the entire team a pep talk to fire us up.

If you could only listen to one song before each match, what song would it be?: “Tribe” by Bas and J.Cole.

How did you get into playing tennis and what have you done to get to the high school level?: My brother introduced me to the game. Because he had been playing it, I started practicing with him every weekday for 2 hours.

What do you plan to achieve after graduating high school? I plan on going to college and from there get a job in engineering.

Who has been your biggest influence through your high school tennis career and why?: Coach Bowers, because he has helped me evolve my game and become a better overall player on and off the court.

What is the strangest thing that has happened during one of your matches?: One time I served the ball and it hit my opponent in the face and resulted in giving him a bloody nose.