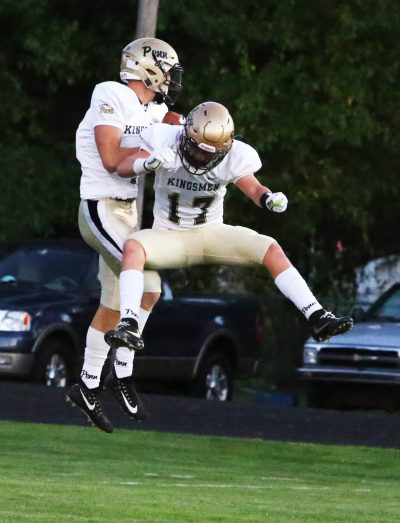 Penn led 45-0 after one quarter and led 58-0 at halftime. Clay scored on the last play of the game.

Hunter Whitlow got the Kingsmen rolling when he bolted for nine yards for a TD. Ryan Whiteman ran for the two-point PAT.

Penn’s Wild Bunch defense struck for the next touchdown. Leegrand Alovili recovered a fumble in the end zone that was forced by James Morris.

Brock Boynton hauled in a seven-yard TD strike from Ryan Lynch to push the Kingsmen lead to 22-0.

Lynch connected with Zach Usenick for a 39-yard TD pass as the Kingsmen lead grew to 29-0.

A safety by Rockne Hurley gave Penn a 38-0 lead.

Brock Zolman’s electrifying 57-yard TD run finished off the Penn scoring assault in the first quarter and made the score 45-0.

Jeremiah Gosztola scored a touchdown on a four-yard pass from Ron Powlus.